These 24 islands in the Aegean Sea east of Greece offer spectacular blue water sailing among historic architecture on its inhabited islands, which include Alonnisos, Skiathos, Skopelos and Skyros. Below we provide a suggested itinerary that includes cultural ports of call as well as beautiful, secluded harbors. 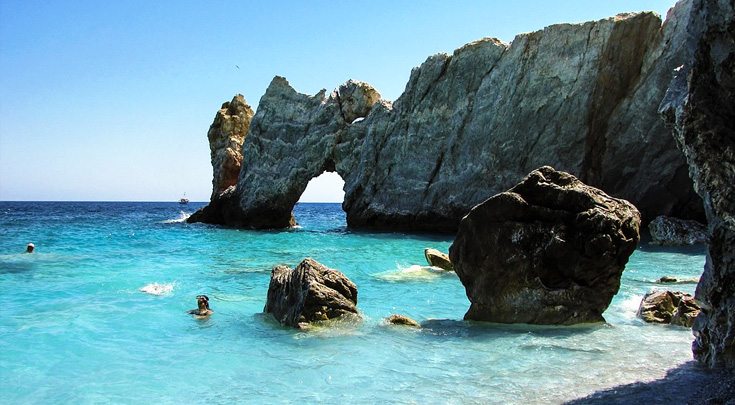 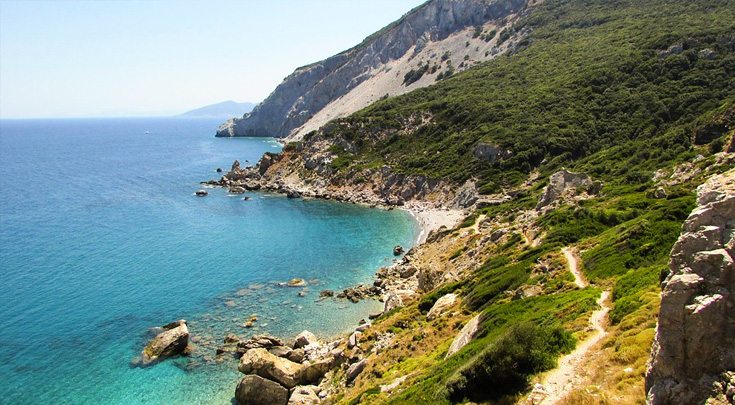 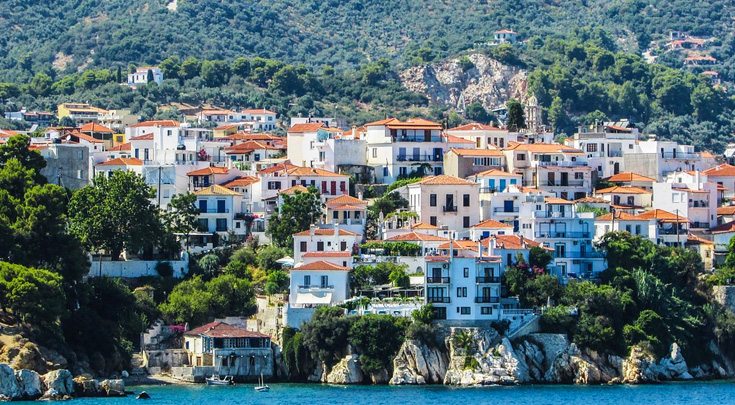 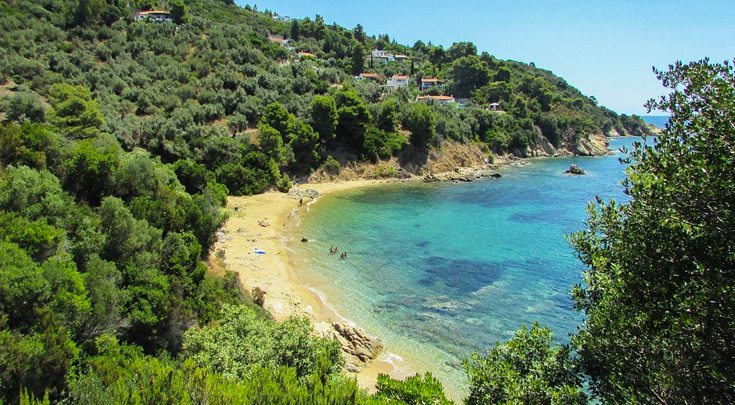 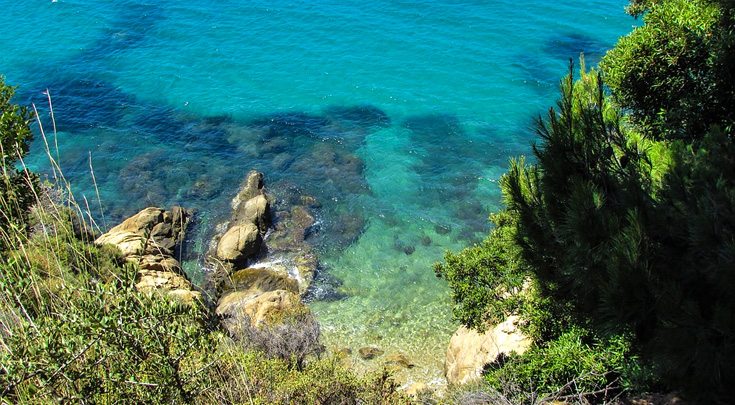 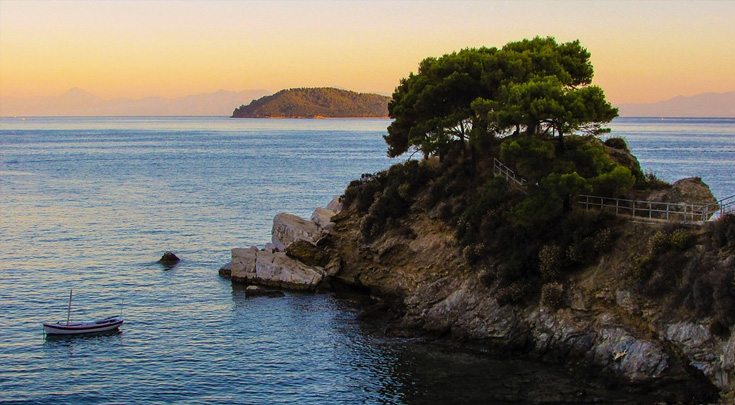 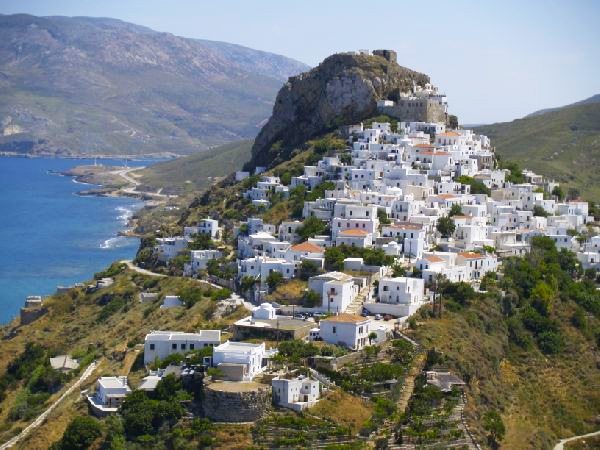 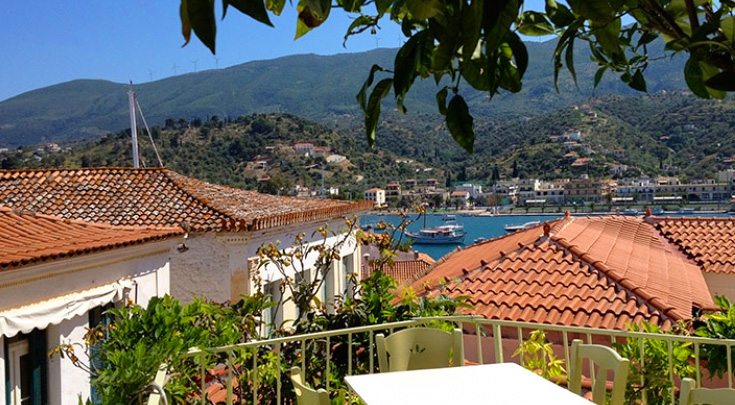 Ag. Konstantinos, Trikeri (33 miles) – The island of Trikeri, in the south of Pagasitic gulf and at the tip of the Magnesia peninsula, is particularly beautiful and remains, architecturally at least, more or less unchanged since the beginning of the century. It is not much more than a mile across, and a less than a thirty minutes walk takes one across to the other side of the island. With a population of fewer than 100, it is so little known that it doesn’t even get a mention in most guidebooks. The island is free of any traffic (no roads, no cars) and transport is by foot, donkey or boat. There are plenty of olive trees, juniper, oleander and wild flowers. Its untouched bush land and crooked pathways, its numerous wildlife and the stunning sunsets provide the perfect environment to get away from it all.

Trikeri, Skiathos (30 miles) – Skiathos is one of the most beautiful islands in Greece. Green and luxuriant pine and stone pine forest cover it with many olive trees in between. Skiathos also has at least 60 large and small fine beaches. The Koukounaries Beach counts as one of the greatest beaches in Greece. It is long with golden fine grain sand, shaped as a perfect curve and behind the beach there are tall, beautiful verdigris stone pine trees.

Skiathos, Skopelos (19 miles) – Skopelos is part of the Northern Sporades. It is a beautiful island which attracts thousands of tourists every year. The island is known for its beautiful beaches with their clean crystalline waters, surrounded by pine trees forests and also for the charming capital, built amphitheatrically in the heart of a bay, composed of whitewashed houses with tiled roofs in narrow alleys and stairs. The main towns of the island of Skopelos are the capital and the village of Glossa. Most of the beaches are located on the south-west coasts. The most famous of the island are Panormos and Milia.

Skopelos, Alonissos (6 miles) – The Alonissos of today was given this name during the first years after the liberation of Greece and is not identified with the Alonissos of the ancient Greek world. The island during antiquity was called Ikos, while the Alonissos of the ancient Greeks, was probably the neighboring island of Kyra Panagia, to the North. Patitiri was chosen to be the main Port, because of its natural harbor. In the area of Alonissos-N.Sporades, the first National Marine Park was established in 1992 and includes extensive islands and sea areas with particular natural, morphological and geographical characteristics.

Alonissos, Peristera, Kyra Panagia (18 miles) – Peristera, the scarcely inhabited islet, was once joined to Alonissos and is graced with some nice sandy beaches usually relatively unpopulated. It consists of secluded bays sheltered from the “meltemi” (northern) wind, and sparkling white houses perched on the hilltops. One will find the remains of an ancient castle here. A tavern operates on the main beach providing refreshments and seafood. An ancient wreck was recently discovered, just off the island by archaeologists.

Kyra Panagia, also known as Pelagos or Pelagonisi is hilly with two deep bays. To the east one may find the restored Monastery of the Blessed Virgin. One may find fantastic beaches for sunbathing and relaxing in the warm Mediterranean sun. The island offers spots of unrivaled beauty and crystal clear waters.

Kyra Panagia, Skyros (37 miles) – The fourth and largest island in the Northern Sporades. It lies further out into the Aegean than the other islands and is really more like the Cyclades in its style of building and its weather pattern. The main village climbs up the slopes of a steep hill rising straight up from the sea and culminating in a castle (Kastro) at the top. This is an impressive, naturally fortified rock, which gave Skyros an important strategic position in the Northern Aegean. The views from the Kastro (and the monastery of Aghios Georgios just below it) are absolutely stunning and it is well worth climbing up to it through the beautiful, winding, cobbled streets of the village.

Skyros, Karystos (68 miles) – Karystos has known great glory at different times, from the prehistoric period. It took its name, from the son of the historic-mythical Centaur Heron, the heroic Karystos, who was the ruler of this place and gave it its name. According to mythology, the romance between the two greatest gods of ancient Greece, Zeus and Hera, was created on the top of mountain Ochi (1389m) above Karystos. In ancient times, Karystos developed trade, shipping and science, art and sports as well. The famous athlete Glaukos who was a winner at the Olympic Games of 520 B.C. in the boxing competition, was a Karystian. Karystian marbles (Marmor Karystium) is famous and the pillars that were made of them are still decorating ancient monuments in Athens, Rome, Istanbul and other places. Many people came through Karystos: Persians, Romans, Venetians, Franks, Turks, and the monuments that have been saved can give evidence of their crossing.

Karistos, Athens (32 miles) – Within the sprawling capital city of Athens it is easy to imagine the golden age of Greece when Pericles had the Parthenon (the most eminent monument of the ancient Greek architecture) built. Athens is built around the Acropolis and the pinnacled crag of Mt. Lycabettus, which the goddess Athena was said to have dropped from the heavens as a bulwark to defend the city. The suburbs have covered the barren plain in all directions and the city is packed with lively taverns and bustling shops.