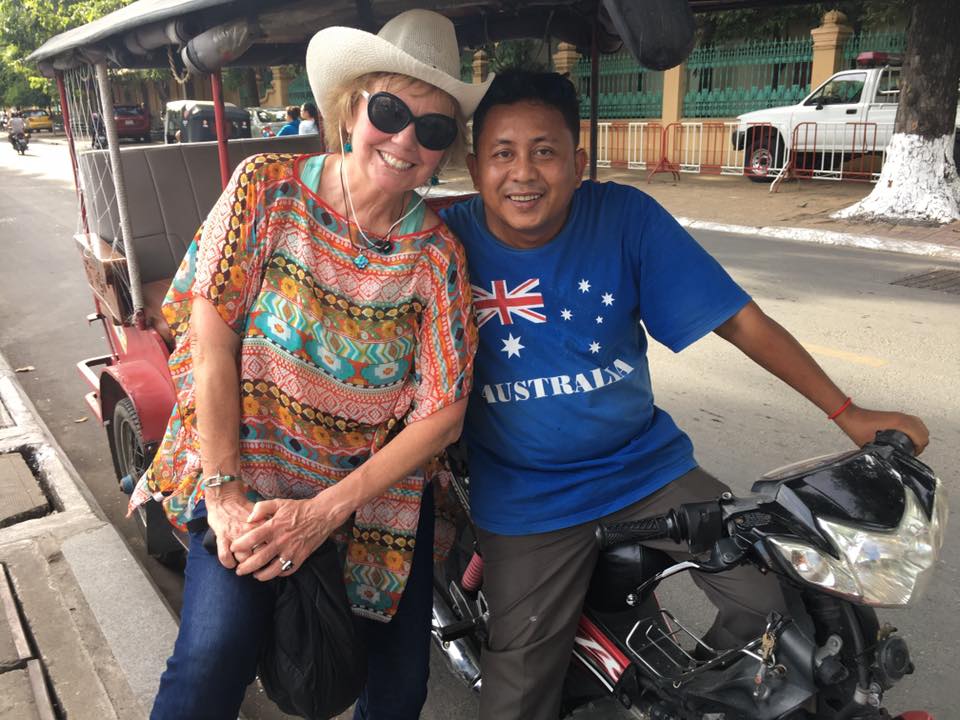 Greetings from the East, dear readers! There is so much to share in this part of the world that I write today in the hope that you’ll join me on my journey through Cambodia and Vietnam.

Blessings come in so many forms and traveling through these sacred countries is one of them! Sure, I love traveling by yacht charter but we’ll get to that later. To start, we traveled by motorized tuk tuk – one of the most popular form of transportation in this region.

Here I am with our tireless designated driver, SomOn. He was just one of our many blessings on this trip.

Luxury be a lady tonight, I like to say! And so it was with our stay at the 5-star Raffles Hotel Le Royal in Phnom Penh, capital of Cambodia. It is the premier hotel of this vital city and proud to have hosted legends like former First Lady Jacqueline Kennedy.

On this fam (familiarization) trip, fellow yacht broker and adventurer Karen Hughes and I did enjoy the history and legend that belongs to Raffles. You can tell by our clothes, right? Go ahead and laugh but on fam trips brokers have to be ready for work and play so easy dress, sensible shoes and hats are generally required. Plus, caffeine and cocktails, to be polite. 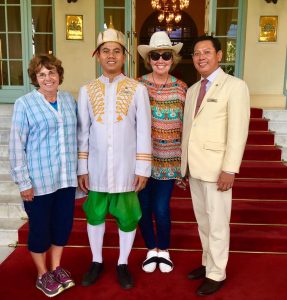 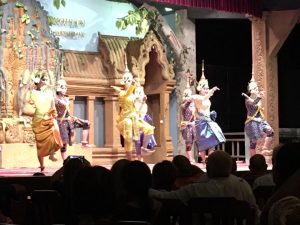 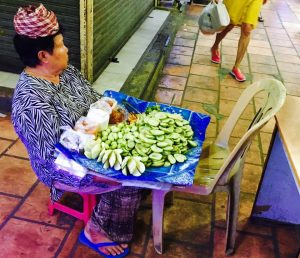 Color and drama infuse Cambodian life. The markets are bursting with new and unusual foods – like these black eggs at the Russian market. If only we had more time to eat!

This Trad Khmel dance and dinner provided a delicious immersion into the culture.

And this is just the beginning… 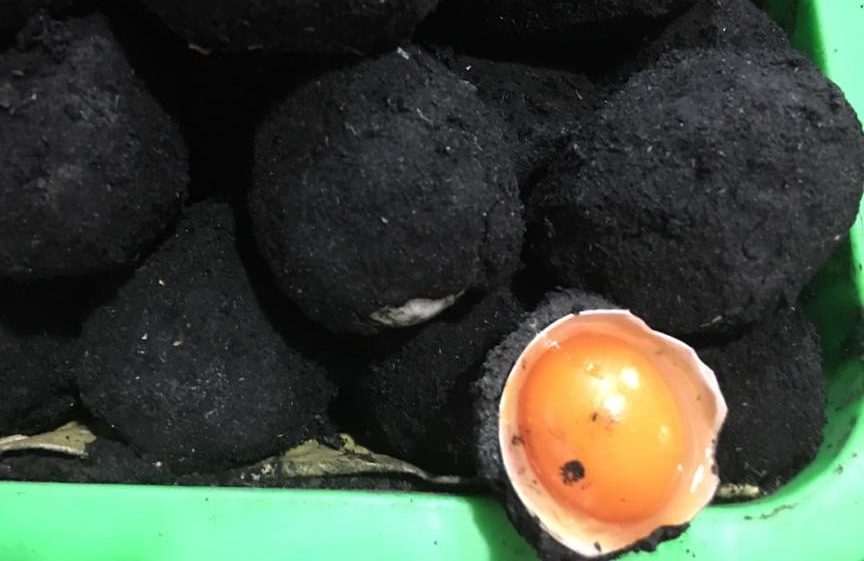 Busy street scenes in Phnom Penh give way to the also busy but serene scene at the famous temple and world’s largest religious building, Angkor Wat.

We learned that the “temple that is a city” has the epic proportions of the Great Wall of China, Taj Mahal & Egypt’s pyramids rolled into one! Indeed, the site is breathtaking – from the tiniest detail of its 2000 asparas (heavenly nymphs) to the vastness of its towers, walls and moat.

Let me save you a trip to Wikipedia:

It was originally constructed as a Hindu temple of god Vishnu for the Khmer Empire, gradually transforming into a Buddhist temple towards the end of the 12th century.

Angkor Wat has endured serious damage and deterioration by plant overgrowth, fungi, earthquakes, war damage and theft. Gratefully, the war damage to Angkor Wat’s temples has been limited when you compare it to the rest of Cambodia’s temple ruins, plus it has received the most restoration. Now a UNESCO World Heritage Site, preservation strategies are in place and are helped in part by funds from tourism.

No, really. I was actually blessed by a Bhuddist monk. I feel serene from the inside out. This is a place to embrace the importance of giving and serving. 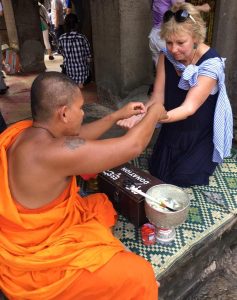 Blessed by a Buddhist monk 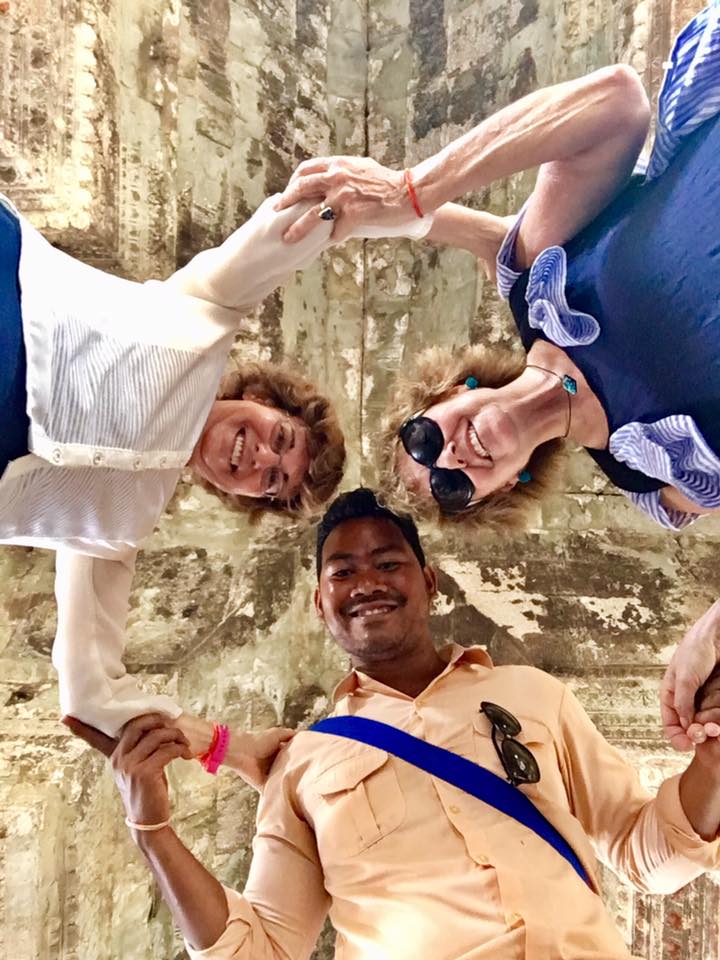 Guide Extraordinaire Rith with Karen and me at Angkor Wat 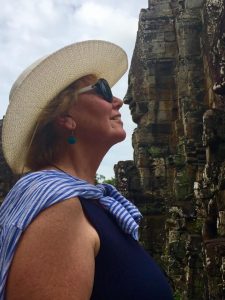 Nose-to-nose with a stone sculpture at Angkor Wat 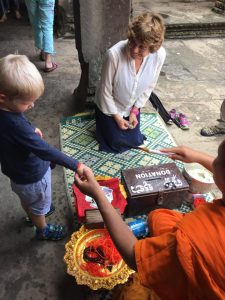 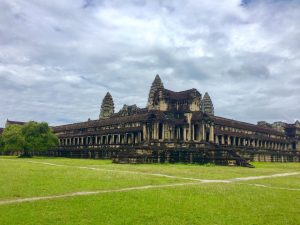 Angkor Wat is known as the largest religious building in the world. 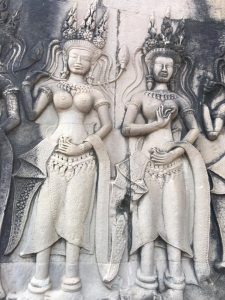 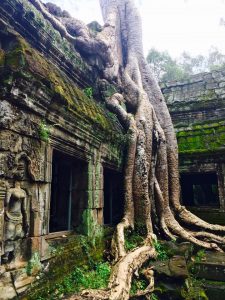 YET ANOTHER BLESSING: OUR GUIDE, RITH

A good tour guide is both a blessing and a curse: they give you the best experiences (blessing) but they become friends and eventually you have to say good-bye (curse).

Karen and I can’t imagine a better new friend on this trip than our Guide Extraordinaire, Rith. He gave us informative tours, indulged our need to know and photograph everything and laughed at our silly humor.

If only we could take him everywhere – but we had him for our day in the city of Siem Reap (pronounced se-em re-ep), the “gateway to the Temples of Angkor Wat”. Siem Reap is vibrant, modern and chic so we may just save it for our next installment.

In the meantime, please enjoy more photos from this part of my journey through Cambodia and Vietnam. Be inspired. 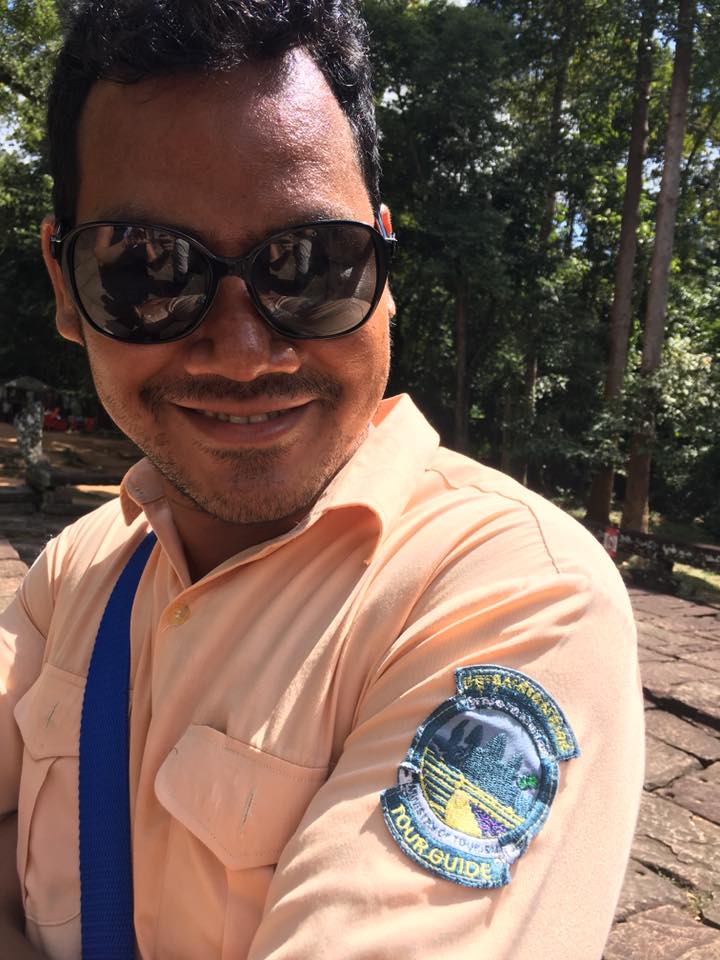 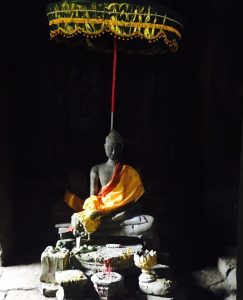 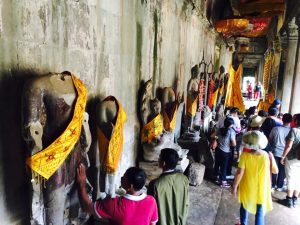