In the travel & yachting industries we have what are called “FAMS” or familiarization trips, when the agent/broker actually gets to go and experience exactly what their client would. This is the best way to sell our product: by cruising on a yacht ourselves, visiting the locations, tasting the cuisine and witnessing the five-star service up close and personal. Thanks to the fabulous FAM on the M/Y INTEGRITY, we were able to create this suggested itinerary for touring the exciting Galápagos Islands. 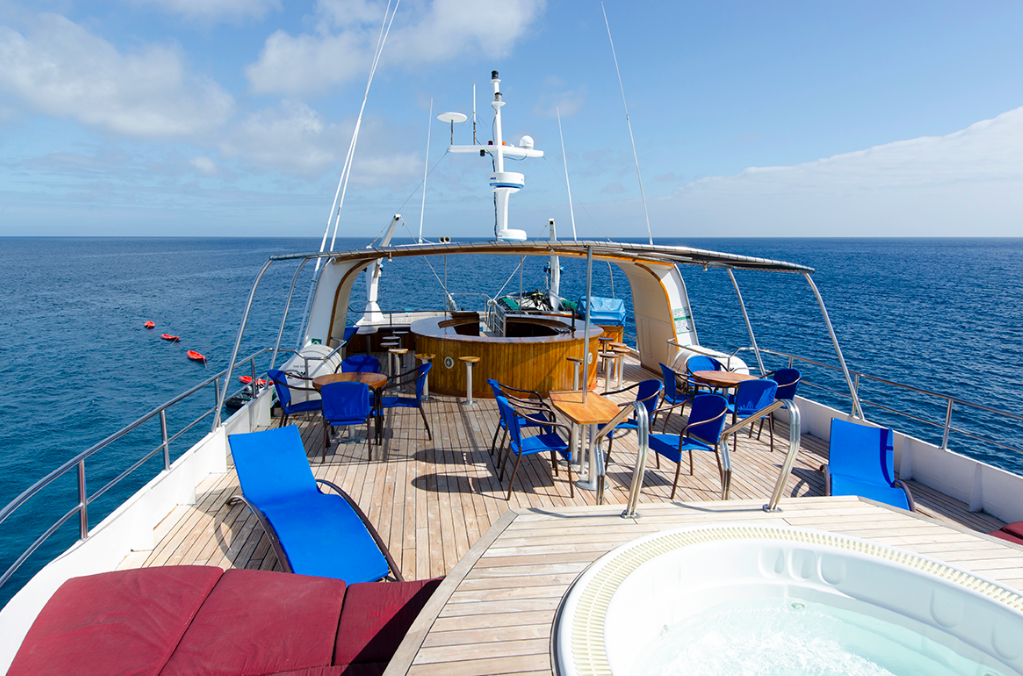 Here is Carol’s Galápagos Islands itinerary for the week of October 8-15, 2016, updated during the trip.

Consider reserving our choice, the M/Y INTEGRITY, for your own Galápagos Island adventure! The Western Route itinerary, below, can be adapted to suit your interests. 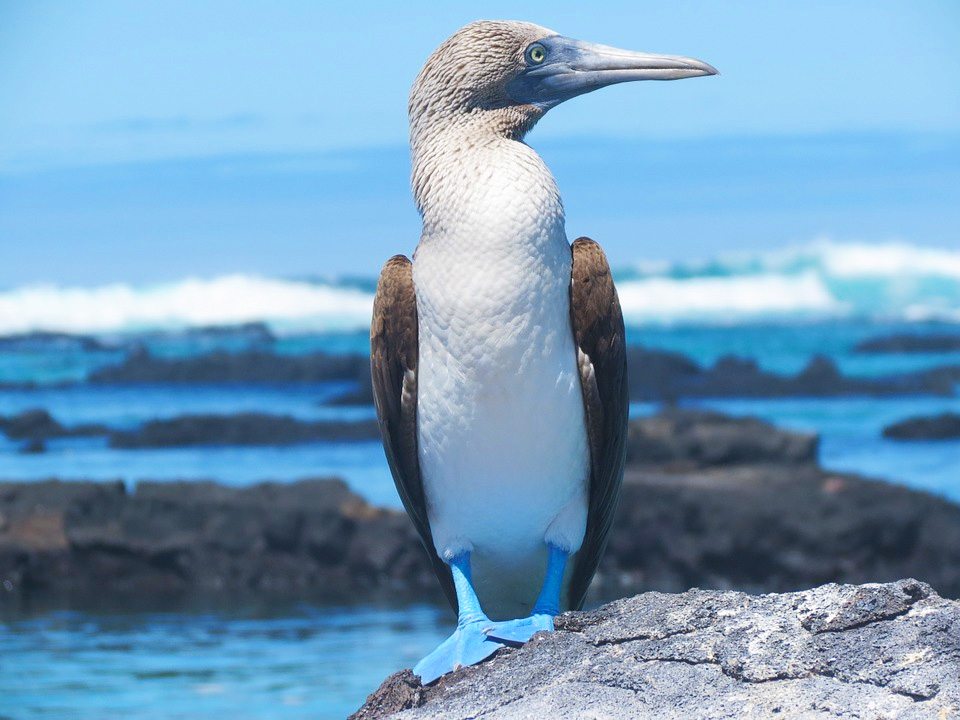 The M/Y INTEGRITY is taking the Western Route, which features the younger, volcanically active islands of Isabela and Fernandina, as well as Floreana—site of some of the more outlandish stories of the Islands. You’ll have daily opportunities to snorkel and kayak with sea lions, sea turtles, penguins and colorful fish. At night the stars shine brilliantly while Swallow-tailed Gulls—the only nocturnal gull in the world—swoop through the boat’s lights.

Visit the highlands of Santa Cruz Island for a special opportunity to view the islands’ most famous reptile: the giant tortoises in their wild habitat. What a privilege to see an endangered species roving in this lush environment! The vegetation of the area includes the Scalesia Forest (an endemic giant daisy tree) and birds such as the vermilion flycatcher will delight everyone with its scarlet feathers against an emerald green forest. Look for Darwin’s finches (most of them from the tree-finch group), particularly the famous Woodpecker Finch.

We will visit the Charles Darwin Research Station and Galápagos National Park headquarters to learn first hand of the conservation and research efforts in the islands. There, you’ll see several subspecies of adult tortoises, lots of hatchlings, and learn of the repatriation programs that are saving several subspecies of tortoises and iguanas from extinction. Later in the afternoon, we will board our yacht, Integrity, for dinner and set sail on our Island cruise. We will live aboard the yacht and spend as much time exploring the Galápagos Islands as park rules permit. Each night, we’ll travel on to the next destination.

We’ll see flamingos wade in a large lagoon by a green olivine sand beach, and take a short hike to Flour Beach where sea turtles nest and rays frolic offshore. Then, we’ll snorkel at Champion Island with curious, playful sea lions and hope to catch a glimpse of the rare Floreana Mockingbird.

First we’ll stop at the wooden barrel that has served as a “post office” since the 18th Century, where you have the opportunity to continue the tradition. Then we head into the Floreana Highlands to visit tortoises and learn about the history of Wittmer Caves and hear the stories of the Wittmer family, the doctor and his mistress, and the Baroness and her lovers. Our day ends with a barbecue on board INTEGRITY. 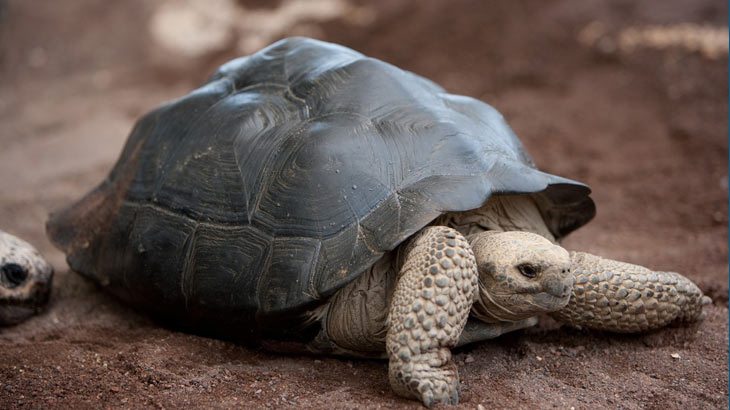 Giant tortoise on the Galápagos Islands off of Ecuador

We walk onto this young lava flow at the base of Cero Azul, past cacti and other early colonizing plants. This flow is dotted with numerous “oases” of brackish lagoons containing a wide variety of life, including flamingos, Paint-billed Crakes, White-cheeked Pintails, and Common Gallinules.

We float in our skiffs silently into the narrow channels of the mangrove lagoon to see rays, Flightless Cormorants, penguins, pelicans, lava herons, sea turtles, sea lions, Blue-footed Boobies, many fish and other species that inhabit this vital zone. The Marielas Islets, just outside the bay, are home to many penguins, and visitors can usually observe them both on shore and swimming nearby.

This site is unique. In 1954, volcanic activity caused a 6 kilometer stretch of coastline to be uplifted 5 meters in a matter of hours, stranding coral heads, and all sea life that couldn’t escape, more than a kilometer away from the new shore. We walk among the skeletal coral garden, now home to lizards and mockingbirds. Urbina Bay is also home to large, colorful land iguanas. During certain times of the year we may encounter Alcedo tortoises which come down from the highlands to nest in the warm sands of Urbina Bay.

This peninsula is on the most pristine and youngest island of Galápagos. Fernandina is highly volcanically active with eruptions occurring frequently, the latest in 2008. Upon landing, we are met by an abundance of small, dark marine iguanas and brightly colored Sally Lightfoot Crabs. We walk out on a pahoehoe lava flow—younger than the one at Punta Moreno—past a few pioneering plants. Along the sandy shore we can see Flightless Cormorants, pelicans, and numerous, lounging sea lions. Sunsets are often stunning.

Pirates and whalers in the 19th Century using Tagus Cove for anchorage left their marks on the cliffs of this sunken caldera, a tradition of graffiti that continues to today. A short, steep hike passes Darwin Lake, which sits within a tuff cone and is filled with salt water. This site is an excellent place for viewing land birds, including Ground and Tree Finches, Galápagos Hawks, Yellow Warblers, Large-billed Flycatchers and even sometimes the Woodpecker Finch. A rare sighting of land iguanas is a treat. A dinghy ride or kayak along the cliffs provides views of geologic features, as well as penguins and other bird species.

The large cave and cleaved tuft cone and caldera wall are impressive geological formations and provide a beautiful backdrop for nesting birds, including Blue-footed and Nazca Boobies, gulls, storm petrels, and Brown Noddy Terns. It also forms a calm gathering area for sea turtles. Along with sea turtles, snorkelers can see many species of colorful fish, penguins, sea lions, sea anemones, small jellyfish, and other sealife. 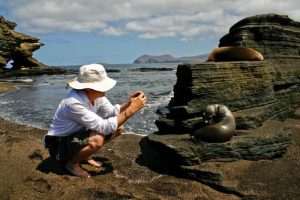 There are two separate trails here. The first meanders along the coast to the fur seal grottoes, a safe haven for the shy Galápagos Fur Seal amongst the crags and swimming inlets, and home to American Oystercatchers, marine iguanas and ubiquitous sea lions. The second, less-used trail heads inland to a lagoon at the Salt Mine Volcano where flamingos and other birds are found.

Espumilla is a red-sand beach and a sea turtle nesting site, with an inland trail that passes a small lagoon and into the arid zone where it is possible to view many land birds in a beautiful landscape, including Galápagos Hawks. While snorkeling at Buccaneer Cove, you may see sea lions, fur seals, sea turtles, rays, sharks, pelagic fishes, and amazing underwater geologic formations.

Enjoy a quiet and peaceful ending to your adventure at Bachas’ fine, white beach. Two small lagoons just over the dunes sometimes host flamingos. “Bachas” comes from the remains of a barge that ran aground decades ago, leaving just a few rusty spines visible today. In Caleta Tortuga Negra we have a silent skiff ride to see sea turtles feed and mate in the calm waters, and three species of sharks, Spotted rays, egrets, and lava herons. Aboard we celebrate our last night together. 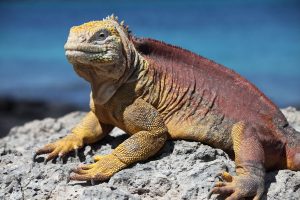 The trail at North Seymour heads inland where we will see the largest colony of Magnificent Frigatebirds in Galápagos, Blue-footed Boobies, and occasionally land iguanas. We then head along the coast where we will have ample opportunity to observe sea lions and marine iguanas.

We’ll have breakfast on board Integrity, then disembark at Baltra Island.